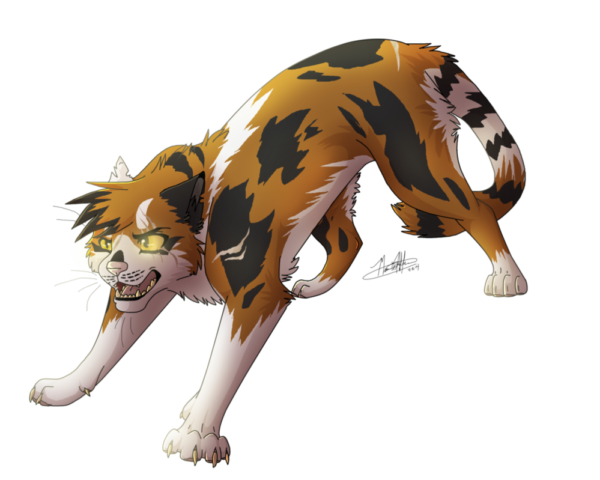 Maplekit discusses why Dark Forest characters are in the Dark Forest!

HI! This is my first article every kitten so excuse its badness. Oh wow badness is a word. o_o

First we will talk about my one of my favorites. The one my fursona is named after. You got it Mapleshade!
She wanted to be loved because the meanie Appledusk (I think that was his name) didn’t appreciate her. Evil kitty. Now, that’s basically the reason she killed a bunch of cats. *cough* Spottedleaf *cough* *cough* So if you think about it it’s Appledusk’s fault that she’s in the Dark Forest. She did get her revenge because if I remember correctly she killed Appledusk OR one of his kits. I forget… I have a bad memory. Because he mated with a mate stealing she-cat. (Forget her name) So like I said. BLAME THE MEANIE APPLEDUSK! So in conclusion for Mapleshade she is in the Dark Forest basically because Appledusk.

Brokenstar
So here we will talk about lil’ Brokenstar. He was teased as a kit and abused by Lizardstripe. At least Runningnose was nice after Yellowfang yowled at them. So I will be nice to him. Tangleburr and Deerfur (I think) were meanies and disobeyed Yellowfang when she said STOP. They were BIG meanies. Then was his ambition. I think Raggedstar had a LITTLE bit to do with this but not much soooooo I will be nice to him also. He killed his own father. (remind you of something/someone? hint hint walks on skies sort ofish) I think the bulling made him want to be stronger. So he went to a cute “I’m a tree!” to “I killed RAGGEDSTAR!!” Evil kitten. So in conclusion for Brokenstar it’s Tangleburr, Deerfur, and Lizardstripe’s faults.

Tigerbutt.
You guys know I don’t like him. His father left him to be a kittypet and his sisters died when he was kit as well. Also he had the vicious Thistleclaw as a mentor. Now that basically explains it but I’m going to go more deeper. I believe after his dad leaving he was sad and decided to get revenge by hating kittypets. So when Firestar came he was angry and he probably remembered Thistleclaw and all the dark thoughts he had so he decided to follow his old mentor. So in conclusion it was most likely Thistleclaw and Pinestar’s faults.

Darkstripe
He was Tigerbutt’s follower so the evil thoughts most likely got crammed into his head that way. He tried to act innocent after Tigerbutt’s exile but couldn’t. Thanks to the amazing Sorrelkit(tail) the whole clan found out about his evilness. He fed Sorrelkit deathberries and tried to drive Bramblestar and Tawnypeltevil by taking them to secret meetings with Tigerbutt. So in conclusion he is in the Dark Forest because of Tigerbutt.

So if you think about these cats all are in the Dark Forest because of cats doing something. CAUSES AND EFFECTS PEOPLE REMEMBER THAT IN SCHOOL KIDS!!! So if Pinestar and Thistleclaw didn’y do what they did Tigerbutt and Darkstripe might not have been evil. If Appledusk wasn’t so mean Mapleshade MAYBE wouldn’t be evil. It’s unknown because her kits are still dead but maybe they would have more? If Tangleburr, Deerfur, and Lizardstripe weren’t so mean Brokenstar might not be evil. So yeah. All in all, blame cats for stuff. x3 jk