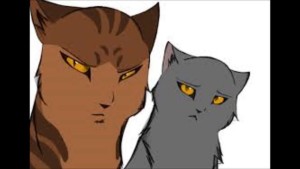 Hi everyone, Sparkfrost here. Have you ever read a medicine cat scene that was just so saad you could die? Well, I have.

1. When Raggedstar rejected Yellowfang because of her choice to become a medicine cat and when she chose to give Brokenkit/tail/star away to Lizardstripe and not make it known that she was the mother.

2. (Okay this is not really something that has to do with being a medicine cat, but it was so sad I just had to add it) When Spottedleaf died to protect Sandstorm, and Firestar was grieving because she wasn’t there in StarClan with him.

3. When her mates, kits, and Clanmates rejected Leafpool because she had mated with Crowfeather of WindClan and gave them to Squirrelflight and she pretended they were her kits.

4. (Also related to 3,) When Hollyleaf tried to force Leafpool into eating deathberries, bcause she couldn’t bear being half-Clan and was angry at her mother.

5. (This isn’t completely sad but sort of tragical) When Mistystar made Mothwing stop being a medicine cat because he didn’t believe in StarClan, even though her apprentice, Willowshine, could do the StarClan part while Mothwing did her healing stuff.

6. When Brokenstar framed Yellowfang for killing her sisters, and exiled her. She had the leave her apprentice and friend, Runningnose, and Brokenstar made the Clan, including her parents and littermates, believe that she actually did kill her sisters. (They were from another litter.)

7. Mudfur’s death. I just thought it was so tragic. His Clan had to leave him with two ThunderClan and two RiverClan elders, when they left on the Great Journey.

8. (This isn’t remotely sad or tragic, but I want to include it.) When Ravenwing told every cat that Mapleshade’s kits were fathered by a RiverClan warrior, Appledusk. He technically(spelled wrong) didn’t do much, but he still made the Clan turn against her.

So I hope you liked that, BlogClan. I’m probably going to write another article soon.
PS- I was reading a really great fanfic about Snowkit, Speckletail’s kit who got carried away by a hawk. It was called Snatched: The Story of Snowkit.
Sparkfrost out!

9 Responses to "The saddest medicine cat scenarios by Sparkfrost(kit)"