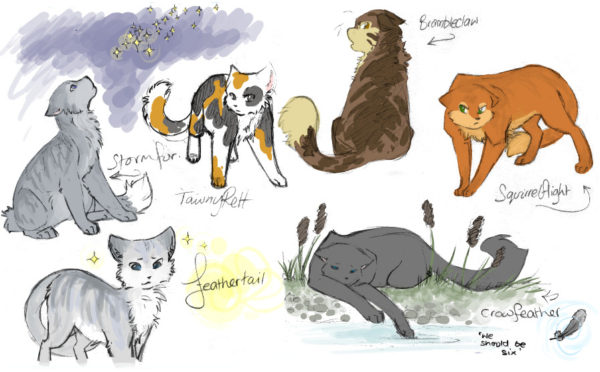 Hey BlogClan! It’s Flowerkit, with my first article! 😀 In this article, I will be discussing my top 3 favorite warrior cats! Feel free to tell me your opinions!
*SPOILERS*

3. Feathertail – She’s included in the New Prophecy arc, and she journeys with the other cats included in the prophecy, Brambleclaw, Tawnypelt, and Crowpaw/feather (Besides Stormfur and Squirrelpaw/flight). She sacrificed her life to save Crowpaw and kill Sharptooth. If Feathertail was never in the Warriors books, Crowfeather may have died, and Leafpool wouldn’t have fallen in love with him, and there even is a possibility Jayfeather, Lionblaze, and Hollyleaf would have never been born. 🙂

2. Squirrelflight – She’s included in the New Prophecy, Power of Three, Omen of the Stars, and Vision of Shadows arcs. At first, she seems annoying to Brambleclaw, and followed him to fourtrees when the cats with the dreams gathered there to discuss it. They went on the journey, Squirrelpaw followed them against orders. Then in the Power of Three arc, her sister, Leafpool, gave birth to three kits – Jaykit, Lionkit, and Hollykit – Squirrelflight helped her sister and claimed them as her own. Then in a fire, Ashfur threatened to leave Jayfeather, Lionblaze, and Hollyleaf trapped into the fire…but Squirrelflight told him it didn’t matter, they weren’t her real kits But when the secret went out, her mate, Brambleclaw, started avoiding her, hurt. The 4 clans knew, because Hollyleaf told them in the gathering, after killing Ashfur. Then in Omen of the Stars the cats close to Squirrelflight started forgiving her. In Vision of the Shadows, she realised she was expecting kits, then gave birth to them, Alderkit and Sparkkit. In my opinion she was a good mother. 🙂

1. Jayfeather – He is included in the Power of Three, Omen of the Stars, and the Vision of Shadows arcs. He’s blind, so he had to choose the path of a medicine cat’s. He learns he, and his littermates are included in a prophecy, but then Hollyleaf disappears and they realise she wasn’t part of it. They go through hard times when they learned that they were half-clan and their mother was a MEDICINE CAT. In Omen of the Stars, Dovewing is born and he finds out that she is also included in the prophecy. Then they have to battle the dark forest, many lives are gone, but they won. Then in the Vision of Shadows, he is a good mentor to Alderpaw. 🙂

Thanks for reading! This was a short one, but I hope my next one will be longer. 🙂 See you around! 😀

17 Responses to "My Top 3 Favorite Warrior Cats by Flowerkit"