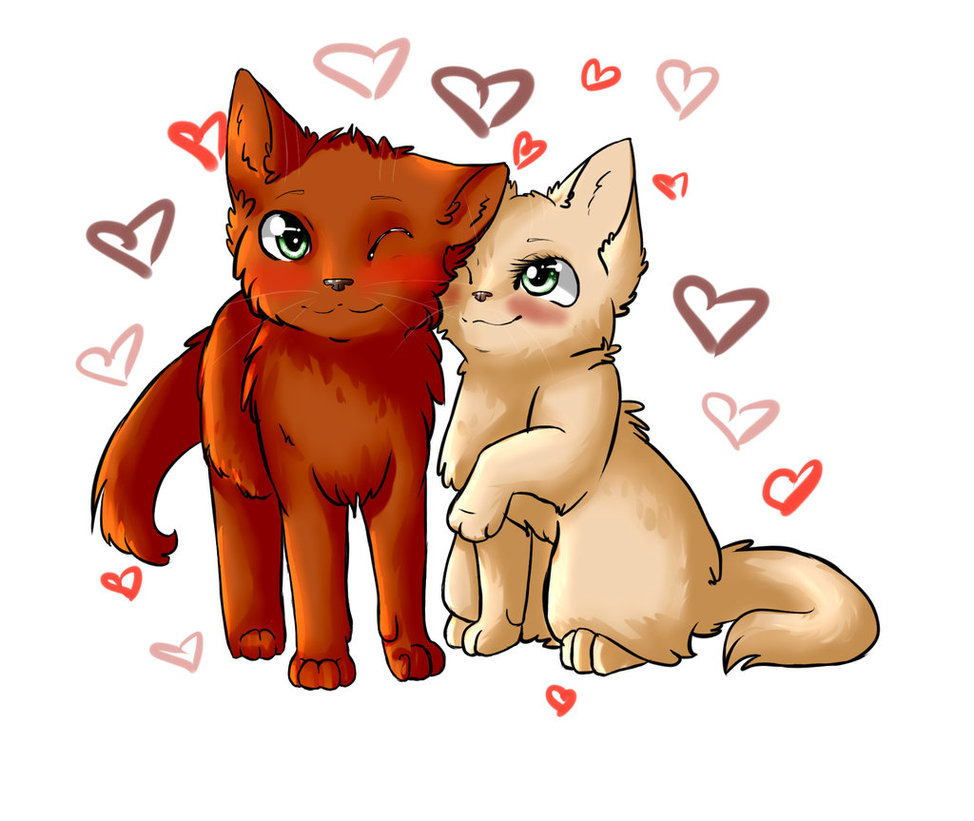 Hello, Clearpaw here for my Top 10 Favorite Couples. Remember, this is my opinion, so please don’t judge. This does not include Crack Pairings such as Ash x Scourge or Gray x Fire.

Now, I don’t love this couple and I don’t hate it, but its still a better couple than Gray x Millie. It had some development, but not too much. I think its pretty cute how they would sacrifice anything for each other.

I think that this couple is adorable. It has a good development, starting off from being friends to ending up becoming mates. I’m happy that Brightheart respects Cloudtail’s lack of faith in Starclan and how Cloudtail still loves Brightheart despite having half of her face torn off from a dog. I think very few people like Daisy x Cloud, which is good because it has no development whatsoever. I thought that it was kind of mean for Cloudtail to ignore his mate and kit to take care of Daisy. Luckily Leafpool (I think) stepped in and told Cloudtail to go over to his mate and share prey before, their relationship could get any worst.

I love Poppyfrost, but that’s not the reason why i like this pair. Even though, it had no development at all and Berrynose quickly moved on from Honeyfern to Poppyfrost, i think its adorable. Honeyfern, made Berrynose’s arrogance worst because she respected it and I don’t think Berrynose would’ve matured, if it wasn’t for her death. I know that in Dovewing’s Silence, they were a bad example to their kits, but think of this, for nearly your whole life you’ve trusted a group of people, but you soon find out that their secretly training with the bad guys, despite them turning on them. It would take a long time for you to completely trust them.I also think that the fight with the trainees also helped Berrynose mature.

I just think that its adorable that Sharpclaw found his special someone in life that respects his stubborn personality. It even stated in the Ultimate Guide that Sharpclaw’s closeness to Cherrytail, gave him a sense of purpose he hadn’t known this whole time, and i just found it cute. I cant wait to see their kits!

I like this couple because its one of the most realistic couples compared to real life. Its also pretty cute!

This couple is adorable! It also had excellent development starting off from enemies to acquaintances to friends to mates! Now people don’t say that Sandstorm “stole” Firestar from Cinderpelt because they were never a couple and Firestar is too old for Cinderpelt. Cinderpelt never confessed her feelings to Firestar and she was the one who opened Firestar’s eyes, telling him that Sandstorm is really fond of him. So they lived on until Firestar died and even though that he needed to die, i found it sad how Sandstorm grieved for her mate because they have been through a lot together.

4, Appledusk x Mapleshade (Apple x Maple):
Even though I hate Appledusk, i just like this couple because i dont find Apple x Reed a comfortable couple.

Now please no hates on this because I have always found Crowfeather x Leafpool a cute and adorable couple. It even states that he would choose Leafpool over Feathertail and Nightcloud. Feathertail was too old for him and he never really loved Nightcloud, he used her to show his loyalty to the clan. I found it adorable on how he grieved for Hollyleaf when she died in the Last Hope, like a true father. Their love is obvious to everyone on how they sacrificed their positions in their clans just to be with one another.

I think that this couple is cute. Thrushpelt acted like a real father to Mosskit, Mistykit, and Stonekit even though they weren’t his. He didn’t go all Yandere on Bluefur when she didn’t loved him and accepted it even though he was sad. They became great friends and everything. I hate Blue x Oak – it had 0% in development. It was all: boom love at first sight, kits at first night.

Even though I love Bumblestripe and hate Dovewing, this couple is my OTP. It had a good development and would’ve went great if it wasn’t for Dovewing and her dumb Tigerheart obsession. My heart broke when they broke up because I really wanted to see their kits and I’m pretty sure that most of the Warriors fans thought so too. Tigerheart is a fat childish noob who deserves nobody, but Bumblestripe is a really kind and sweet cat and I’m surprised on how Dovewing didn’t notice that yet. A great tom and mate is right in her sight and she ignores him for dumb, old Tigerheart. If there’s one thing I want in Warriors, it would be for Bumblestripe and Dovewing to get back together. Please?

18 Responses to "My Top 10 Favorite Couples and Why; by Clearpaw"