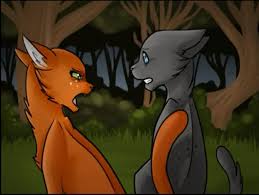 Hey peeps, Sparkfrost here. I know, everyone hates Ashfur, but he was good before. Here’s my theory:
IT’S SQUIRRELFLIGHT’S FAULT.

Cuz before she came, he was all, ‘Whoopie! My Clan is best! I would never hurt any of them!’
Then after she came, he was all, ‘Ooh, ooh, marry me, Squirrelflight!’
Then after she broke his heart, he was all, “Grr! I’m plotting with Hawkfrost and Tigerstar to get Firestar killed by a fox trap!” and, “Oh you wanna fight, Lionblaze? Well I’ll show you how to fight. TO THE DEATH!” And last but not least, “I am going to tell every Clan at the gathering that these aren’t your kits, Squirrelfllight!”

I think it is a sorta unfair that he ended up in StarClan. Yes, Bluestar (or was it Spottedleaf?) told Jayfeather his only mistake was to love too much, but he tried to kill five cats just to hurt one cat. Hes just like Mapleshade. And look where she ended up.

He does have a good side:

He loved his sister Ferncloud very much.
He was kind to Cloudtail when he was Cloudkit, even though he had to share his mother.
He loved Brindleface, his mother.

Yes, he loved his family, yes, he was loyal to the Clan, but he let himself be taken over by anger and hatred. Those cats usually end up in the Dark Forest.
Now to the other cats.
I actually think Spottedleaf was lame. Her life was Firepaw this, Fireheart that.
Squirrelflight was awesome till the fourth New Prophecy book, Starlight. Then she turned lame.

Leafpool suffered too much because of love. I blame Crowfeather for this, who took her away when he knew, deep down, that her loyalty lay with her Clan. THEN he rejected her. Boo, Crowfeather.

Hollyleaf relied too much on the warrior code. I thought she should get a life.
Lionblaze was kinda ridiculous. He was so focused on fighting,training, fighting, training, did I mention fighting? to focus on the real problem right under his muzzle: Cinderheart. (He was an idiot to tell her about the prophecy and she was stupid to think his destiny was so great they couldn’t be great. He knew Tigerstar was evil, but he trained with him anyway.
Crookedstar had terrible parenting in the mother department, but was fair-minded and just. He is one of my favorite charecters.
Jayfeather is my other favorite character. I think he shouldn’t have relied on Sol and the prophecy so much, though.

Now to sinful, sinful Ashfur. His problem was that he put his heart completely into one cat, and let himself get shattered, and did’t pick up the pieces.

Hope you liked this. Posting another article soon.
Sparkfrost out!

22 Responses to "My (Completely Honest) Opinion on Certain Warrior Cats; by Sparkfrost"