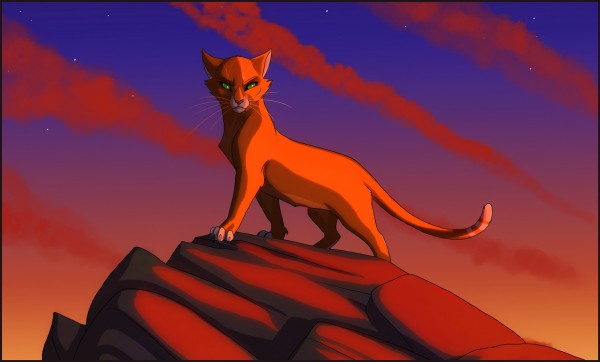 Honeypaw discusses who exactly is related to Firestar. Everyone in ThunderClan? EVERY CAT IN THE ENTIRE WORLD???

That is a common question. I know Cakestar has gotten many questions on her page about Firestar’s distant relatives. I guess I can point out who IS related to him rather than who isn’t. I have looked at the allegiances and almost all of ThunderClan is related to Firestar SOMEHOW! Whether it is blood or marriage, Firestar has a family army! It seems that there is always Firestar around the Lake. I am sure that you can imagine a million Firestars running around. Let’s get to the good part!

I have put together a family tree (not a professional one). Let’s start with Sandstorm’s side.

Flashnose is Daisytoe’s sister. We can’t complete this without that branch!

Nutmeg and Jake: Firestar and Princess

Princess and Unknown: Cloudtail and others

Now let’s look at Cloudtail’s side:

Hey! Let’s do Crowfeather’s side:

Then Crowfeather has some ancestors…..

Well, does that make you see how much of ThunderClan is surrounded by Firestar’s kin. I hope you didn’t get confused in all of that. Thanks again for reading!

21 Responses to "Is Everyone Related to Firestar? by Honeypaw"