I know some of you write book reports or projects on Erin Hunter. Here’s some information that might help.

First – here are my cats! They are my Best Cats Ever! Flower is the one with her tongue out (she’s always washing) and Miu-Miu is rolling on his back (he’s always got filthy paws) 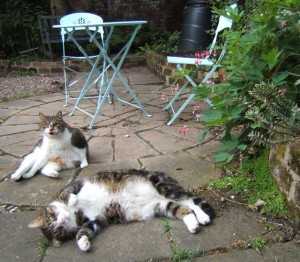 Important Dates:
I was born somewhere outside Birmingham, England, in November 1967.
I attended King Edward VI High School For Girls, Edgbaston. Then I moved to Surrey and studied History at London University.
In 1992, I moved to Scotland and began my writing career. It was walking through the woods beside Loch Lomond that gave me much of my inspiration for ThunderClan’s territory.
In 1997 my son Josh was born. 🙂

How did you become a writer?
I wrote my first book when I was four. It wasn’t very good, or long, or well-spelled, but I was proud of it.
I’ve written ever since and when I left University I started sending my work to publishers. Eventually, after many rejection letters, I found a small publisher that hired me to write “how to” books and activity books.
In 2001 I sent a writing sample to Working Partners, a packaging company based in London. They liked my style and asked me to try out for a new project they were planning about feral cats. (see below)

How did you meet Cherith Baldry and Victoria Holmes?
Vicky is an editor who works for the company (Working Partners) that had the original idea for Warriors. I had recently sent her some samples of my writing and she asked me to try out for the Warriors series. So I wrote her a sample and she liked it and asked me to write the first two books (Yay!) Cherith was already working with her on other projects and Vicky asked her to come on board as another Erin so we could keep up with the publishing schedule. I have never actually met Cherith! (she lives in the south of England, I live in the north)
When Erin branched out into Seekers, Tui Sutherland, who’d been the editor on the series for HarperCollins, began writing as one of the Erins

Why did you make up the name Erin Hunter?
Working Partners came up with the name. The reason Vicky always gives for choosing that name is it is close to “Brian Jacques” alphabetically so we’d appear in the same section on bookshelves in shops and libraries which was the market we were originally aiming for (cold-blooded marketing I’m afraid but it doesn’t mean we don’t LOVE working on Warriors. The characters have become almost family, and when I’m writing about them I get so involved I actually have been known to cry when I write a death scene – sob!)

What are the names of your cats?
Dead Cats
Mitzi, my black, deaf, beloved childhood cat
Lottie, a tortoiseshell who survived cat-flu as a kitten, but who tragically died when she was only 7
Willow, a diabetic and grumpy but adorable cat who lived to the ripe old age of 17.
Still-alive cats
Miu-Miu and Flower (brother and sister. Love shredding sofas. Loo-roll, wall paper….)

How can I write to you?

You can write to me, Victoria Holmes or Cherith Baldry c/o