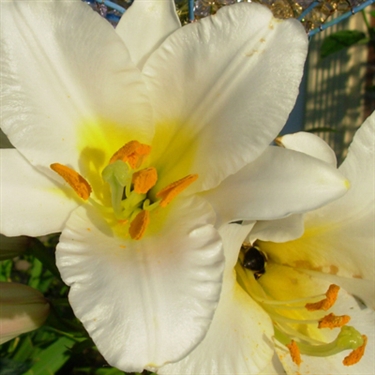 Hello, my fellow Blogclanners! I’ve come to inform you of a few herbs that are actually poisonous to cats! There might be a few herbs that the books use, but are still toxic! So if any of these plants are in your home, remove them immediately. Some plants have alarming effects. Death may occur if eaten.

I’m not particularly sure if anyone has heard of this particular plant. But it is commonly known as the Belldonna lily or St. Joseph lily. Cats become poisoned by expressing our curiosity to the red or scarlet plant by nibbling on them. Blogclan can become poisoned by eating flowers, stems, or leaves.

Yes! Aloe! The scientific name is aloe vera and is toxic to cats. Despite being a herb to treat burns, this is actually dangerous to cats because of something called saponins. Saponins give cats gastric upset, vomiting, abdominal pain and diarrhea.

Surprised? Apples are actually toxic to cats. The ASPCA says this:

Yes. Apricots. ASPCA says that symptoms of consuming an apricot have the same effects as an apple, especially wilting.

Bet you no one saw that coming! Dock is toxic to cats, believe it or not. Dock is also known as sorrel and causes kidney failure, tremors, salivation. So I’m sorry to all the cats who have received a treatment of dock… Because it’s toxic!

Now, I’m not trying to root out all the herbs the cats have used and declare them dangerous, but chamomile is actually pretty serious. They cause contact dermatitis, vomiting, diarrhea, anorexia, allergic reactions. Long term use can lead to bleeding tendencies.

Daisies are also known as chrysanthemum(s), which are also poisonous to cats…. So yeah. Daisies cause diarrhea, hypersalivation, incoordination, dermatitis, and vomiting.

I’m sorry, but, Erin Hunter, a lot of these herbs you use are dangerous to cats! Ragwort is also known as tansy, and tansy is… poisonous to cats! Strange! Though humans may require stomach pumping if eaten in large amounts. But still, ragwort causes, said the ASPCA: “The plant is not very palatable, but will be eaten by animals with no other forage; poisonings typically occur from ingestion of green plant material or material in hay. The toxic components can cause liver failure, referred to as “walking disease” or “sleepy staggers”. Signs include weight loss, weakness, sleepiness, yawning, incoordination, yellowish discoloration to mucous membranes (icterus), neurologic problems secondary to liver failure (aimless walking, chewing motions, head pressing). Animals may appear to be normal at first, then become suddenly affected; the syndrome progresses rapidly over a few days to a week. Liver damage, depression, anorexia, vomiting, diarrhea, muddy mucous membranes, weakness, ataxia.”

This was 8 herbs that are poisonous to cats.

This is Halfpaw. May Starclan REALLY light your path! (Or Plasma Stars.)

[Note from Kate:  Certain lilies, other than the Amaryllis Halfshadow mentions, are highly toxic to cats. Those big white lilies you get in bouquets with the bright yellow pollen that stains everything are deadly to cats. They harm their kidney function dramatically. So if a bouquet of flowers arrives at your house with lilies in it – make sure they are put somewhere your cat can’t touch them. http://www.cats.org.uk/wolverhampton/news/lethal-lilies]

28 Responses to "Fan Article: 8 Herbs and Plants That Are Poisonous to Cats by Halfshadow"