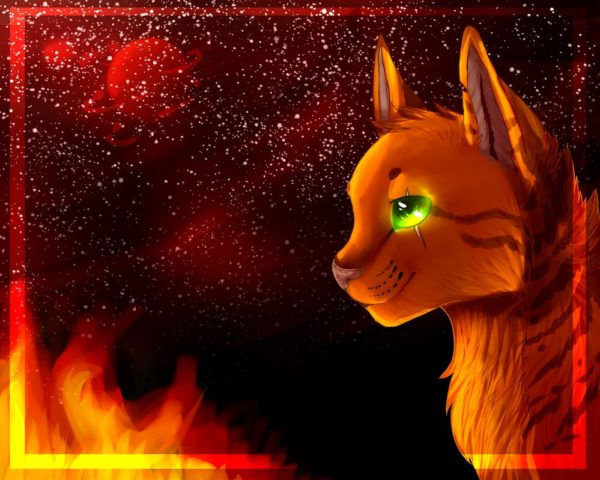 I just did this cause I felt like it, but here we go. I’ve always kind of wanted to do one of these, and why not kick it off with one of the most iconic characters in the entire series: Firestar.
Firestar is a bit infamous for being a “Gary- Stu,” However, in “The Prophecies Begin” he wasn’t 100% perfect. He broke the warrior code more times then I can count, and he had quite a bit of self doubt in “The Darkest Hour.” He had thought multiple times that he was “leading the clans to their death” when he created LionClan to defeat BloodClan. (I should know, because I’ve reread that book like a billion times.)

Now to look at “Firestar’s Quest.” In this one, we start off a few moons after BloodClan was driven out of the forest. At first it seems normal, until Firestar starts having eerie dreams about some cat asking for help, but not saying a thing. He intends to go help this mysterious cat by himself, and then Sandstorm comes along. They argue many times during the quest, and they even bring Spottedleaf into it. However, it does confirm that Sandstorm isn’t the “second best” that Sandstorm thought she was. But lets get to the actual SkyClan part. *Cough* BIGGEST PLOT TWIST EVER *cough.* I was legitimately shocked when I first found out about SkyClan, and the fact that there was this cool lost clan that Firestar had to save. And then he goes through and recruits a bunch of cats to restart the lost clan. Then a bunch of rats happen. And their leader can speak cat. Okay then. I get that other cats have been killed by rats, and that they’re no joke to deal with, but Firestar lost a life in that fight. A “Gary- Stu” wouldn’t of basically DIED at the paws of a rat that can speak cat. (Tee hee that rhymes.) After that whole fiasco, Firestar and Sandstorm return to their beloved home, ThunderClan.

The New Prophecy and beyond.
TO INFINITY AND BEYOOOOOND!
Well, here is where things started to get interesting. At the beginning of The New Prophecy, Firestar does not like Brambleclaw. Which is strange, because he mentored this cat, and he accepted him despite his resemblance to Tigerstar. But nope, he distrusts him again. It. Makes. No. Sense. It’s a bit odd. But that’s all I’ve really got to say about Firestar in this arc.
In The Power of the Three, something that bugged the the whole time is that Firestar rarely was seen interacting with his grandchildren. (I could be wrong, its been a long time since I read that arc) I mean, if I had grandchildren, I’d want to hang out with them. He even, dare I say it, seemed to be a bit scared of them. His EXACT quote when they where born where “They have come.” And when Jayfeather stalked Firestar’s dreams, he was all like “WHAT DOES IT MEAN AHHHHHHHH!” even though it was one of the most obvious prophecies in my opinion. That is not perfection.
In Omen of the Stars, we still didn’t see much of him. He did talk to Dovewing privately at one point, and gave her great advice. Then something that made Gary- Stu hunters flip out happened. He was the fourth cat. (I personally thought it would be Mothwing or Hollyleaf, but nooo) And I get it. But if he truly was perfect, he wouldn’t of ended up dying. His death was very well written in my opinion, and it showed that even the prophecy cats weren’t safe. And since he was dead at this point, I can’t say anything else about him except that he gave Bramblestar a life.

So there we have it, Firestar isn’t a Gary- stu. I’m gonna get so many arguments against this when it comes out…